During the last two years, I have experimented with various Linux based terminal server solutions, primarily LTSP, for use at my school. This is what I have learned in that time.

For the uninitiated, a terminal server system allows multiple users to connect to a single powerful server that runs their applications using a thin client. The server then returns the output of the application to the user. On GNU/Linux systems (and other UNIX/UNIX-Likes for that matter) this is typically accomplished using X11 forwarding over SSH. Such a system typically provides the following advantages over standalone workstations:

The most popular Linux terminal server solution seems to be the Linux Terminal Server Project or LTSP for short. Which has the following key features:

LTSP clients, both thin and diskless, boot using PXE. Which, in short, is a way for a DHCP server to point a booting machine to a TFTP file server on the network, which in turn provides the machine with a bootable binary image, that then bootstraps a Linux system using an NBD (network block device) as root. The user is then shown the LDM login greeter. What happens when the user logs in are dependent on the type of client being used.

A thin client will authenticate on the server over ssh and then forward the clients display to an X11 session running some desktop environment or window manager on the server. LTSP also provides some nice additions that make Mass storage devices, sound, and CUPS printing play nice over the network.

DebianEDU, originally SkoleLinux is a Debian Pure Blend that provides a preconfigured system that contains amongst other things: DebianEDU, originally SkoleLinux is a Debian Pure Blend that provides a preconfigured system that contains amongst other things:

X2Go and it’s proprietary sibling Nomachine both use versions of Nomachine’s NX protocol, in functionality they can be compared to Microsofts remote desktop features that are built into Windows.

They work by using client software installed on top of existing operating systems, they have clients available for Windows, Mac, and Linux. They also provide an Xsession that can provide a more terminal-server like experience on Linux systems.

The performance between the two seems about comparable, although we only tested with a few clients at a time. It should be noted however that Nomachine is proprietary, and as such, I wouldn’t recommend using it, and I certainly wouldn’t force it on my fellow students.

My experiences with the various solutions

I will go over my experiences with the different solutions in chronological order since that seems most sensible.

DebianEDU is what got my attention in the first place, It seemed like the perfect solution for our school. We installed it on some old server and After spending about a week playing around with it and reading the documentation we had a pretty good understanding of the overall structure of the system. In part due to the quality of the documentation, which included the following illustration, that I think does a good of explaining the structure of a typical terminal server setup. With a mix of thin and diskless clients, and with some machines running completely different OS’s That have been integrated into the system. We decided on Debian pretty early on in part because of our familiarity with it, and in part, because all the necessary components are packaged for Debian. Probably because of DebianEDU.

Some of our early experiments with vanilla LTSP were on bare metal, but because of the experimental nature of our approach, we frequently messed up and had to redo work. Because of that and a server upgrade to two used Dell R710’s we decided to virtualize our servers instead, which gave us the ability to take snapshots of our machines, and roll back to them when we messed up. Another advantage that this approach brought was that is made it easier to separate different parts of the system.

For instance, we ran our LDAP server and LTSP server on two different VM’s we also moved our users’ home directories to an NFS share on the host instead of keeping them on a qcow image.

One of DebianEDU’s best features is it’s web-based user and group management interface called GOsa2, although it seems like it ceased development years ago. There exists a newer fork called Fusiondirectory that we installed in our own system. We even wrote our own program to scrape user data from Lectio, our schools Student Information System, and format it in a CSV file with the right structure and data for use with Fusiondirectory. 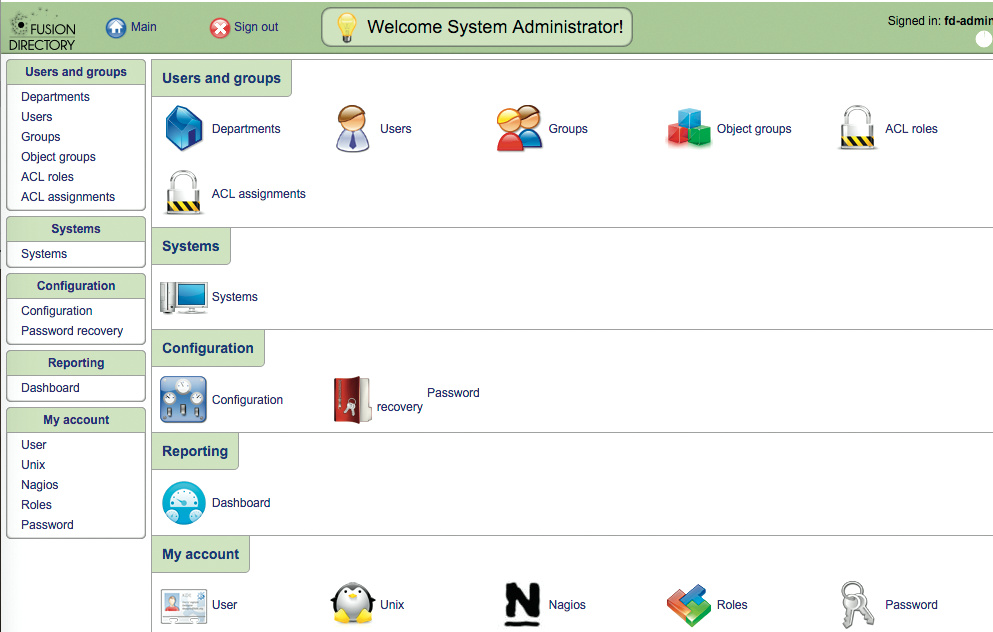 We didn’t end up spending much time with nomachine, due to it being proprietary. But the technology itself is very good and can be had with X2Go, so we didn’t see much point in pursuing it further, It was also WAY out of our budget.

Although It didn’t end up fitting our use case I think DebianEDU lives up to it’s stated mission goal almost flawlessly:

Create a complete solution: provide a complete educational software solution suitable for real scenarios, entirely free.
Reduce technical barriers: The best way to reach wide spread is by easing installation, use, maintenance and administration. Debian Edu/Skolelinux should work out-of-the-box.
International scale: as part of a collaborative project, it is essential to offer as many close to native-level translations as possible.
Educational software ecosystem: it is necessary to locate, package and classify educational free software.
Teaching documentation: it is important not only to provide a great platform but to provide documentation on how to better use it for teaching.

My experience with LTSP has been very good, with one glaring exception. The documentation is very poor in some areas. Especially around the diskless clients. (Note: As far as I can “Diskless client” is a DebianEDU term, most other resources refer to them as fat-clients.)

Thin clients in their current form are very useable for office work and other light desktop tasks such as programming. But the experience slows to a crawl the instant you try to do anything even remotely graphically demanding. Which means they are useless for some tasks, including ones that are essential for our school, including game development in Godot and 3D modeling in Blender.

Something to consider is that a modern implementation with video compression and decompression (like valves steam in-home streaming) could have performance comparable to a diskless client. Although it would be heavier on both ends.

Diskless clients have the same management and maintenance advantages as thin clients, as well as the performance of a standalone desktop. However, they cost almost the same as a normal desktop. They are in spite of that, the solution we ended up choosing.

We are still playing around with X2go for remote access, but so far it seems like a great solution. We just have to integrate it into our existing system.

After spending a significant amount of time working with and learning about different types of Linux based terminal servers. I have some thoughts on the topic in general.

Although Terminal servers have decreased in popularity over time, the general idea of inexpensive clients connecting to more powerful centralized computing resources is still popular. An example would be Google’s Stadia gaming platform that was announced earlier this year.

Cloud computing like Google Drive and docs with inexpensive laptops like Chromebooks could also be seen as a similar general concept.

Diskless clients, however, given the right circumstances, might have a bright future ahead of them.